If you don’t love grammar but love traveling, this lesson is for you. Why? Well, I used to be a student like you and as a student I got bored reading textbook examples that were neither memorable nor related to my life at all; thus, they didn’t stick in my mind and by the next day I’d forgotten everything I’d learned. Today I bring you a lesson based on my trip to Spain. All the examples you will see here are from the notes I took while I was going on walking tours in Barcelona and Granada, so they are all real examples you can relate to if you have been there, plan to visit these cities or are just curious about historic buildings! I hope you like this explanation of “The passive voice”.

On my first day in Barcelona I went on a free walking tour where I learned about the old, impressive buildings located downtown, which were ideal to teach a grammar lesson. So pay attention to how the following buildings are described. Do you recognize the grammar being used?

This square is in the Gothic neighborhood; however, the architecture isn’t Gothic but Neo – classical.
If you take a look at the photo you’ll see Palm trees in the background. A few are originally from the area but most palm trees were imported from California and Florida.

In front of the lamp post designed by Gaudí

The passive voice – Use

Most palm trees in the Royal square were imported from California and Florida.

This structure is called “The Passive Voice”. The Passive voice is used when the focus is on the action. It is not important or not known, however, who or what is performing the action.

In the example above, the focus is on the fact that the palm trees were imported. I do not know, however, who did it.

How do you form the passive voice?

When rewriting active sentences in passive voice, note the following:

Regular verbs in the passive voice

Remember that the past participle of regular verbs is the same as the simple past.

The most amazing building I saw in Barcelona was La Sagrada Familia and the fact that caught my attention is that this church is still being built! When I went there, I saw the construction workers and machinery. It has been 137 years since its construction began and they’re still building it! Being in an old historic city, I expected to see old churches that were started and finished hundreds of years ago but never did I imagine I would see an old church that is still being built.

La Sagrada Familia and construction work in the background

The back of the church

Renowned Gaudí took over the project one year after its construction began and worked on it until he died. According to my tour guide, this church will be finished in 6 years, so I guess I’m going back to this city once it is finished.

The passive voice in different tenses

Look at the chart and see how the passive voice is used in different tenses.

You must be thinking “Ayleen, you forgot to include the other verb tenses in the chart. Aren’t there other tenses?” And the answer is “Yes, there are”. However, these are the most common tenses used to describe buildings and constructions, so for now I don’t want to mix you up with more grammar that you won’t need to use in this context. As you can see in the descriptions below, I didn’t really need to use the present perfect or past perfect to talk about these constructions.

The Church of Santa Ana in Granada was built in 1501 in place of the mosque of Almanzra. This means that Santa Ana Church is located where an ancient mosque once stood. Unlike other Christian churches, this one is made of bricks. It was designed by renowned local architect Diego de Siloe. The church was constructed according to the architect’s specifications. De Siloe wanted to create a heavily decorated, spectacular building which combined elements of Arabic architecture with Christian imagery, that’s what makes this church so unique. An example of Arabic influence in this church is the ceiling. It is made of carved wood. Carved wood in ceilings is representative of the Moorish craftsmen. 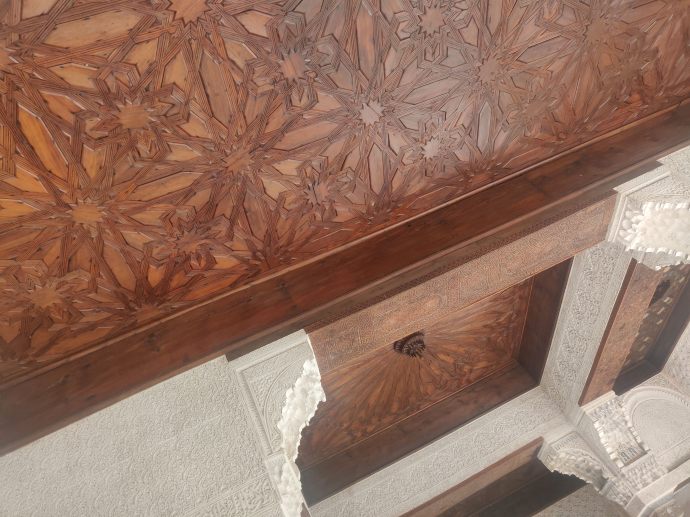 The passive voice when you mention the “doer”

It is known as the Catedral de Granada, or Santa Iglesia Catedral Metropolitana de la Encarnación de Granada in Spanish. This church was built after acquisition of the Nasrid kingdom of Granada from its Muslim rulers in 1492.This cathedral was built over 181 years between 1523 and 1704. The first collapsed after an earthquake so they didn’t even start the second one, unfortunately, the second tower wasn’t finished. In its place there is a smaller tower, which is called Tower of San Miguel. 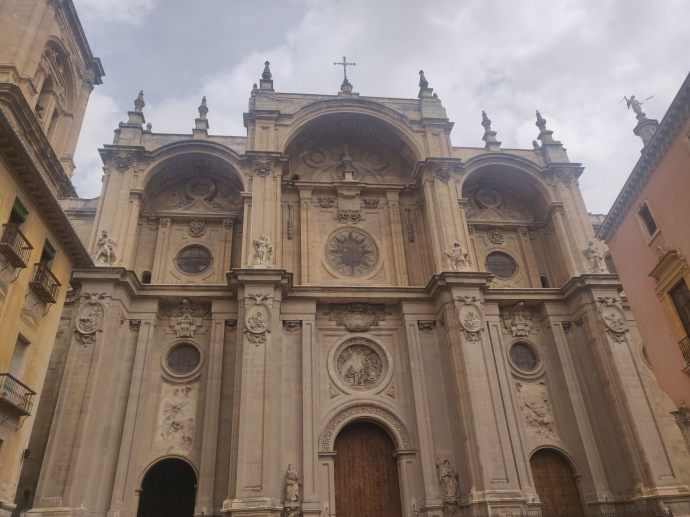 The cathedral of Granada

Me trying to get a nice pic among the tourists 🙂

In the first and second examples the verbs are irregular, that means they don’t end in “-ed”. To form the passive sentences with these verbs you just have to memorize the verbs.

Irregular verbs in the passive voice

Alcaicería is a name which was used all over Moorish Spain and parts of the Middle East. Granada the city with the biggest Arabic influence in Spain and this market is important because it was one of few Moorish traditions to survive the Christian conquest.

In the past this place was bursting with stalls, Arabic silks, spices and other precious goods were sold here. Nowadays the place is half the size it used to be but it is still a rich area with history and local culture, still packed with interesting, exotic things to buy.

Warning: Take care when walking around this area; it is popular with pickpockets and local gitanas (gypsy women) offering to tell your future or read your palm, for a price. I was stopped by a gitana who tried to give me a sort of plant “for free”, but I’d already heard about them and what they do is first give you something “for free”, next take your hand, read your palm, tell you your future and then ask for money.

Asking questions in the passive voice

To watch a short clip of my visit to La Sagrada Familia, click here.